As I gaze around my family room, I wish I was a domestic diva. I am no where near a domestic diva, in fact I think I am more of a domestic novice even though I’ve been married for nine years and have had kids for more than four and a half years.

I yearn to be an organized mom who has a place for everything–no papers stacked in corners and on counters, no toys strewn about, and no mail from last week still close to the front door. I wish I was one of those moms who have the urge to vacuum when a crumb hits the floor. I wish I didn’t hate folding the laundry.

Now don’t get me wrong, my house isn’t one of those places you see on that Hoarders show. (Not yet anyway.) I try to keep up with it all and throw out the things we don’t need. I don’t have old food wrappers on the floor and stuffed animals stacked to the ceiling. Nonetheless, I could stay on top of the day to day cleaning and tidying more and save myself the anguish of having to try to “do it all” on my Friday day off. Instead of doing what a good housewife should, I always opt for things like taking the kids to lunch at McDonalds. day trips to Disneyland, and play time at the park. And take right now, for example, I’m watching a TiVo’ed episode of “the forgotten” and writing this piece…instead of sweeping and washing the kitchen floor. (And it needs it!)
One day, I hope the good wife fairy comes during my sleep and waves her magic Swiffer over my head. I want her to make me into one of those perfect housewives with the dust-free, handprint free, soap scum-less homes. Until then, I will strive to remain mediocre. I will continue my relentless Friday tidying sessions and always remain behind on my responsibilities. Oh, and I will continue to be thankful for my awesome, amazing and very helpful husband who pitches in and puts up with it all.

Just wanted to post a couple of pieces my husband did for his show, That Morning Show on E!. My husband helped create the show and celebrated his last day there yesterday, as he is moving on to produce a new prime time family challenge show for NBC. While there at That Morning Show as the creative executive, he got to live out his on camera dream and do a bunch of field segments. Here’s a few.

And yes, that is our dog. And yes, that was just before a desperately-needed grooming appointment. You honestly wouldn’t recognize him now. And yes, he is pretty old and just that calm all the time.
The “oh-so-funny” part of this piece is that my husband lost his wedding ring in the surf while frolicking with another woman. Hilarious, right? (INSERT SARCASM HERE.)
I’m so proud of my hubby and all of his hard work. He moved to a roach-infested apartment right after college and got a job as one of those tour guides aboard the trams at Universal Studios. I stayed behind in Long Beach while he worked his butt off to make it in an industry in which he knew no one (in an industry in which you MUST no someone). His hard work and determination never ceases to amaze me. 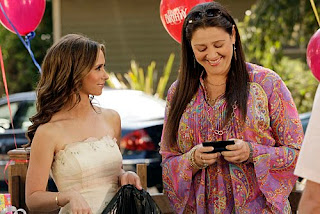 Do you hate watch? You may and not even know it. I brought up the term of “hate watch” recently to a friend and she laughed and then remarked, “I had no idea I was doing it!” I know see her include the term in her Facebook updates frequently.

So what does it mean to “hate watch?” When one “hate watches” a show, they watch a show they hate because they just can’t believe how bad it is. I hate watch a couple of shows, but I am the most dedicated to hate watching the CBS show, “The Ghost Whisperer.” I should preface that by saying there was a time when I watched the show because I liked it. I liked the initial premise and I am certainly a believer in the paranormal as seen in the video below that aired on my husband’s show, That Morning Show.
Ok, so back to what I was saying. I hate watch The Ghost Whisperer, although I used to really enjoy it. And while I can’t say that it jumped the shark overnight, although it has more than jumped the shark at this point. It has jumped the aquarium! And, yes, I realize to say that a show about ghosts has become too unbelievable sounds a bit odd, but it really has gone far beyond what is normally expected within the realm of normal human behavior. I attribute how bad this show has become to HORRIBLE writing compounded by producers who think the general public is incredibly stupid.
As I hate watch each episode, I’m looking for three main (horrible) elements:
1. How many times they (the wardrobe stylists, producers, and Jennifer Love Hewitt) can prop up JLH’s boobs in perhaps the most inappropriate clothing any woman (especially a busy working mom) has ever ran around town in. Oh, and while JLH’s boobs are ever-so-prominent in the dress above, she is wearing a strapless cream-colored dress to her child’s outdoor fifth grade birthday party. Huh? What? Seriously? That seems like a good idea when there’s a ton of kids running around your yard eating cake. Oh and yes, she is holding a trash back and cleaning up in said dress in the pic. I’m sure you have hosted your children’s parties in similar attire. I prefer to pull out my wedding dress for my kids’ parties, but that’s just me. 🙂
2. How JLH has no idea how to pull off being a mother on camera. This inability coupled with the fact that the writers clearly do no have children and have no idea how to write for mother/father roles is a recipe for the most unrealistic portrayal of parenting and parent/child roles. JLH and her tv husband look as though they just took a bottle of happy pills every time their five year old (who incidentally aged from birth to five years in this season’s premiere episode) is in their presence. Whether they are busily eating breakfast in the morning or putting the kid to bed, it’s pure joy and elation. Ok, I love my kids, but seriously…is saccharine really necessary? No one acts like that unless they’ve had a lobotomy, and even then I don’t think a parent would be as happy as the parents on this show were when their son left his toys all over the living room.
3. Ok. And then there’s the moment when this show completely jumped the aquarium in the season before last. At the end of that season, JLH’s husband died and then in the last season his “spirit” jumps into the body a completely different actor. Now, his character should look like the person whose body it inhabits, but doesn’t. At first the show would show both men during the episodes, but now it doesn’t. It’s so weird.
So anyway, I hate watch because the show is so completely insulting and perhaps because I lead a very small life. It is doubtful that I will stop hate watching Ghost Whisperer, no matter how bad a time my husband gives me. Do you hate watch any shows that are so bad that you can’t wait to see where they go?

I am a reading intervention teacher in my town.  I have been working with my students for the last two years.  As fate would have it, I have mostly boys in my groups, and as a mom of boys I feel I am well suited to help these children.

Clearly, the end of the school year is a time for elation and jubilation for everyone involved in the school system.  Students are clearly overjoyed with the prospects of summer.  For parents, it’s a time for report cards, summer plans and arrangements, and reflection upon the years gone by. Teachers and administrators look forward to six to eight weeks off to recharge, relax, and revamp before the next group of students in the fall.

As a fifth grade teacher, the end of the year means so much more.  Fifth grade teachers don’t get to see their students as they grow and change in subsequent grades like their counterparts in the lower grades.  We have had the honor and privledge to work with what I think is the very best grade out there.  Fifth graders are funny and hormonal.  They are dramatic and deep.  They are complex children teetering between being liitle kids and big teenagers.  Fifth graders give us the best to two worlds.  They have more mature sensibilities.  I can joke with them using sarcasm that is lost on younger children and have important discussions with depth and meaning.  They are very inquisitive and yearn for meaningful knowledge.  At the same time, however, fifth graders are childlike enough to enjoy discussing cartoons, fantasy, and giggles over the silliest of issues.  They are still young enough to not think I am completely lame and willing to listen when I have guidance and advice for them.

Like I said, I’ve been working with my boys for two years now and to say I think of them as my own sons is an understatement.  We have worked hard in these months to improve reading fluency, vocabulary, writing skills, and reading comprehension.  I have seen them struggle, give up, struggle again, bloom, and improve.  I know these kids well.  I know their family histories, their personal narratives, and what they like to play at recess and do during their free time.  I know what makes them happy and that certain kids need hugs from me when they enter and leave our 45-minute sessions, because my hugs are the only ones they get.

After tomorrow, my boys will be gone. Tomorrow is fifth grade promotion at my school.  I will be attending the ceremony and hope that I find my big black sunglasses before I go in to work, as I will undoubtedly cry the entire time.  My heart breaks when I think that I will no longer be able to watch over my boys.  They will be moving on to the big wide world of middle school.  I fear that some of them who lack proper adult supervision may fall in to the wrong crowd or lack an educational advocate who knows what they need to succeed.  When I think about their smiles no longer lighting up my classroom, I can’t help but get choked up.

As you journey through your child’s educational career, please take time to think about their teachers and what they go through and feel for your child.  Teaching is a work of heart.  We don’t do it for the money and what you’ve heard about the “great hours” is NOT true.  We do it for the kids…for your kids.

Congratulations class of 2009.  You will be missed.